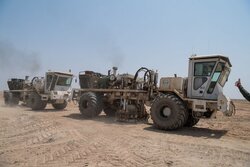 The drilling operation of the first exploratory well of Changuleh oil field in Iran’s western Ilam Province is going to begin soon, a senior official with the National Iranian Oil Company (NIOC) said.

Mehdi Fakour, the Director of Exploration at NIOC, said the drilling project has currently reached 40 percent progress and is going ahead of schedule, Shana reported on Saturday.
“We are now 11 percent ahead of schedule in this project and this confirms that we can complete the well sooner than expected,” Fakour said.
According to Fakour, the project valued at about 233 billion rials (over $832,000) has been awarded to a local firm and it is expected to be completed by the eighth Iranian calendar month of Aban (starts on October 23).

He stated that since Changuleh field is located on the border with Iraq and was a battle zone during the war with the country, it was necessary to first clean up the area from ammunitions left from that period.
After clean-up, the project has been carried out in three stages; the first stage was the construction of an access road to the well, the second stage was the construction of the well area and its cellar, and the third stage was placing the drilling rig, Fakour noted.

“All the necessary preparations have been done and we are ready for drilling the well,” he said.
Located near the Azar oil field in the Anaran block, Changuleh is shared with Iraq's Badra oil field. The field was primarily considered to be independent, but analysis of 3D seismic data proved its shared status.

Based on NIOC data, Changuleh is estimated to need $2.2 billion in investment to be fully developed.
So far, 3D seismic tests, determining the location of wells, and infrastructure activities like cleanup and construction of access roads have been carried out in this field.
According to studies, 19 wells need to be drilled in this field. The field is to be developed in two phases. Phase 1, which involves early production, will lead to the output of 15,000 barrels per day (bpd), while Phase 2 will bring the output to 50,000 bpd.