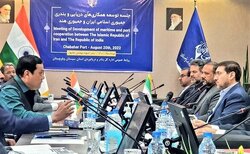 India’s Minister of Ports, Shipping, and Waterways Sarbananda Sonowal has said the Indian government is committed to equipping and developing Chabahar port and will make its utmost effort for turning the port into a regional and international transit hub.

Sonowal made the remarks in Chabahar on Saturday on the sidelines of a meeting with Head of Iran’s Ports and Maritime Organization (PMO) Ali-Akbar Safaei in which the two sides discussed the development of maritime and port cooperation between the two countries, the PMO portal reported.
Stressing the rich cultural and historical relations between Iran and India, the minister noted that such relations will pave the way for the development of bilateral economic cooperation between the two countries.

Emphasizing that the Indian government is committed to developing Chabahar Port, the minister stated that the joint determination of the two countries to develop cooperation in 2016 and during the visit of the Prime Minister of India to Iran led to strengthening bilateral cooperation in relevant fields.
Chabahar port is a transit gateway and has a significant role in International North-South Transport Corridor, he said, adding that the port shortens the time and route of transporting goods for Central and South Asian countries.

Sonowal arrived in Tehran on Friday, August 19 to discuss the expansion of cooperation with the Islamic Republic of Iran’s authorities.
Under a 10-year agreement with Iran, India has committed to developing and operating Shahid Beheshti terminal in Chabahar, located on the Sea of Oman in southeast Iran.
Earlier this month, the Indian Ministry of Port, Shipping, and Waterways celebrated “Chabahar Day” in Mumbai to reiterate its commitment to developing the southeastern Iranian port which is going to connect India to Central Asian markets through the International North-South Transport Corridor.