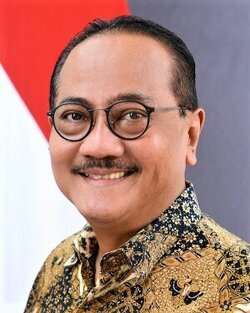 Indonesian Ambassador to Tehran Ronny Prasetyo Yuliantoro says Iran can use Indonesia as a hub for marketing its products in the ASEAN countries.

The envoy made the remarks in an interview conducted by the Tehran Times on the sidelines of a ceremony to celebrate ASEAN Day 2022 in Tehran on Tuesday.
“I think we [ASEAN member states and Iran] have some great potential that can be developed, for instant now with regard to the health field we can have some kind of cooperation, you know this is a time that we can increase cooperation in health sector”, he stated.

“So, this is a good time and then I believe that here is some potential that can be still developed between ASEA countries and Iran”, the ambassador reiterated.
Speaking about trade and economic ties between his country and Iran, the official said, “Of course there is a lot of potential between Indonesia and Iran especially in the economic relation now we increase our cooperation in health sector.”
And asked about the problems in the way of bilateral trade, he replied, “Of course the challenge is how to deal with the payment system between the two countries; we have to look for the way that can solve the problem of payment in the future.”

ASEAN Day 2022 was celebrated at the place of Royal Thai Embassy in Tehran on Tuesday, attended by ambassadors of some of the member countries in Iran as well as some Iranian officials, and also officials from other countries, including Russian and Indian ambassadors in Tehran.
Association of Southeast Asian Nations (ASEAN) is a political and economic union of 10 member states in Southeast Asia, which promotes intergovernmental cooperation and facilitates economic, political, security, military, educational, and sociocultural integration between its members and countries in the Asia-Pacific.

The association was established on August 8, 1967 in Bangkok, Thailand, with the signing of the ASEAN Declaration (Bangkok Declaration) by the Founding Fathers of ASEAN, namely Indonesia, Malaysia, Philippines, and Thailand.
As set out in the Declaration, the aims and purposes of ASEAN are to accelerate economic growth, social progress, and cultural development in the region, to promote regional peace, collaboration and mutual assistance on matters of common interest, to provide assistance to each other in the form of training and research facilities, to collaborate for better utilization of agriculture and industry to raise the living standards of the people, to promote Southeast Asian studies and to maintain close, beneficial cooperation with existing international organizations with similar aims and purposes.