Iran to sign gas swap deal with Russia in near future: Oji 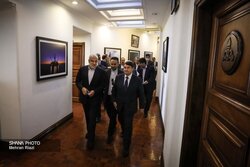 Iranian Oil Minister Javad Oji has announced that a gas purchase and swap deal will be signed between the Islamic Republic and the Russian Federation in the very near future, Shana reported.

"The negotiations for the purchase and swap of gas from Russia have been finalized and [the contract] will be signed in the near future in Moscow between the National Iranian Gas Company and the Russian side,” Oji said referring to a meeting with Igor Yevgenyevich Levitin, aide to the President of the Russian Federation in Tehran on Wednesday.

Negotiations were also held regarding the swap of petroleum products, he said, adding: “Iran has many capacities in the fields of the sea, railway and land transportation which will be beneficial for the development of swap between the two sides,” he stressed.
According to Oji, during the meeting with Levitin, the two sides followed up on previous agreements in the fields of energy and rail transportation and discussed ways of expanding cooperation in the mentioned sectors.

"In the transportation sector, discussions were held regarding the construction of the Rasht-Astara railway and the signaling of the Garmsar-Inche Borun railway line," the Iranian minister said.
He noted that Russian banks are going to finance the said projects, saying: “Since the senior aide to the Russian president has full authority these projects will be operational soon.”
Referring to the signing of a $40-billion memorandum of understanding (MOU) with large Russian companies, Oji said: "Now we have contracts with Russia for the development of seven oil and gas fields, which have a progress of between 10 percent and 30 percent, and negotiations are underway for 14 other fields."

He went on to say that the meeting of the Iran-Russia Joint Economic Committee will be held in two months in Moscow and negotiations on various issues including energy, transportation, and trade will be followed up in that meeting.
Referring to the fact that Russia is committed to financing €5 billion in Iran's development and infrastructure projects, Oji continued: "Some 2.5 billion euros have been already allocated and the funds are being used in power plant projects. We also determined the projects for the rest of the mentioned figure whose contracts will be signed soon."

Emphasizing that the cooperation between Iran and Russia in the field of energy is not one-sided, the minister added that in the petrochemical sector, some contracts have been signed for the exports of products and catalysts to Russia.
The official further noted that some agreements have also been reached with Russian companies for the improvement of the recovery factor of the South Pars gas field, saying: "Another issue emphasized in the MOU signed with Russian companies is increasing the pressure in the South Pars gas field, since the Russians have good capabilities in this area."