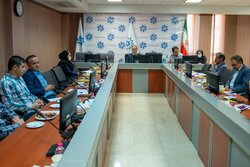 During a working group meeting of the government and Tehran private sector dialogue council on Wednesday the issues regarding the electricity supply to the province’s industrial parks were discussed.

As the portal of Tehran Chamber of Commerce, Industries, Mines, and Agriculture (TCCIMA) reported, in the meeting representatives of the Association of Manufacturers and Suppliers of Renewable Energy Goods and Services (SATKA) said that production units active in industrial parks can prevent electricity shortage during peak consumption periods by installing renewable power stations.

Speaking at the meeting, Mohammad-Hassan Ghafouri, the executive director of SATKA noted that currently, 19 industrial parks and zones are active in Tehran province in which about 6,000 units are operating.

“If these industrial units are equipped with solar power stations of at least 200 kilowatts, over 1,200 megawatts of new electricity generation capacity will be added to the country’s power grid,” he said in the meeting.
Based on a systematic program, Iranian Energy Ministry cuts off the electricity supply to industrial parks in specific hours during summer peak consumption period to manage the capital’s electricity supply and demand and prevent blackouts for household consumers.