More than 9.5m tons of basic goods unloaded in ports in 5 months 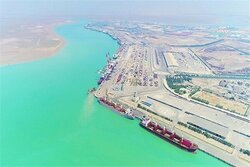 As reported by Iran’s Ports and Maritime Organization (PMO), 9.52 million tons of basic commodities were unloaded in the ports of the country during the first five months of the current Iranian calendar year (March 21-August 22).

As the PMO reported, the figure was 10.382 million tons in the same period of time in the past year.

In mid-August, Government Trading Corporation (GTC) announced that since the beginning of the current year, every day a vessel carrying basic goods has entered the ports of the south and north of the country and the cargoes of these ships have been sent to storage centers after unloading.

The basic goods imported into the country include wheat, rice and oil, which are purchased and imported from foreign sources to provide the country's strategic reserves, supply to consumption centers, and regulate the market.

From the beginning of this year, more than 3,602,000 tons of these data-x-items have entered the country through southern and northern ports, and currently, the cargoes of several ships carrying essential goods that have recently docked in the country's ports are also being unloaded, the GTC stated.

As previously announced by the deputy head of the Islamic Republic of Iran Customs Administration (IRICA), Iran has imported 30.9 million tons of basic goods in the past Iranian calendar year 1400 (ended on March 20).

Foroud Asgari, the deputy head of IRICA for customs affairs, said that the imported goods were in 25 commodity groups.