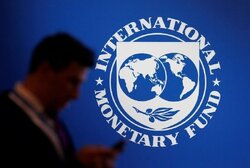 The International Monetary Fund (IMF) in its latest regional economic outlook for “The Middle East and Central Asia Region (ME&CA)” stated that Iran has the least foreign debt among the countries in the mentioned region.

The fund has put the ratio of Iran’s external debt to its Gross Domestic Product (GDP) at 0.5 percent in its report, IRNA reported.

Based on IMF data, the average ratio of foreign debt to total GDP for the countries of the region was estimated at 35.8 percent, while the figure for oil-exporting countries was reported to be 30.9 percent.

Iran has been ranked the world’s seventh country in terms of the lowest foreign debt to GDP ratio, according to established international sources.

Back in February, the Central Bank of Iran (CBI) had put the country’s foreign debt at $9.067 billion by the end of the eighth month of the previous Iranian calendar year (November 21, 2021).

Of the total foreign debt, $6.619 billion was mid-term and long-term debts while $2.447 billion was short-term debts, the data indicated, IRIB reported.

Foreign debt as a percentage of GDP is the ratio between the debt a country owes to non-resident creditors and its nominal GDP.