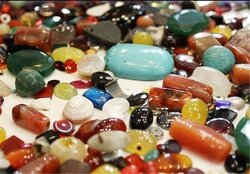 Iranian Industry, Mining, and Trade Ministry has approved the draft of an operational plan for developing the industrial chain of precious metals and gemstones to reach the annual production of 500 tons of such products by the Iranian calendar year 1404 (starts in March 2025).

The draft was approved on Wednesday in a meeting attended by the Deputy Industry, Mining, and Trade Minister Mehdi Sadeqi Niaraki and Ali Agha-Mohammadi, head of the economic group at the office of the Islamic revolution’s leader, IRNA reported.

Speaking at the meeting, Niaraki mentioned the Industry Ministry’s plans for developing the country’s major industries, saying: “Last year, four action plans were prepared to develop the production chains of clothing and footwear, precious metals, food and beverages, and home appliance industries; these industries account for 40 percent of the total value of the country’s industrial products.”

According to the official, facilitating supply, production, and exports, providing trade infrastructures, developing export, supporting domestic manufacturing and import management, empowering human resources and strengthening design and research, as well as amending laws, regulations and directives related to the production of such data-x-items are among the most important axes of the operational plan for the development of the industrial chain of precious metals and gemstones.

Sadeghi Niaraki further noted that the mentioned operational plan has been prepared using the opinions of the private sector and will be unveiled in the near future after the final amendments are applied.

The plan will be communicated to the relevant organizations and agencies after official approval, he added.

Industry Minister Alireza Razm Hosseini had previously announced the allocation of over five trillion rials (about $119 million) for supporting production units active in the field of precious metals and gemstones.