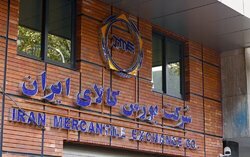 The value of trades doubled at Iran Mercantile Exchange (IME) in the past Iranian calendar week (ended on Friday).

As reported by the IME’s Public Relations and International Affairs Department, 1.026 million tons of commodities worth over $555 million was traded at the exchange, showing 14 percent and 99 percent growth in volume and value of trades, respectively, as compared to the previous week.
As reported, IME sold 603,573 tons of commodities on its metals and minerals trading floor worth more than $345 million.

It's worth noting that the IME played host to trade of 32,492 tons of commodities on its side market as well.
As previously reported, during the past Iranian calendar month (June 22-July 22), 4.21 million tons of commodities worth $1.56 billion were traded at Iran Mercantile Exchange.
The volume of traded commodities shows an 11-percent growth on a monthly basis.

It's worth noting that there was 16,605 tons of various types of commodities traded on the IME's side market.
The value of trades at Iran Mercantile Exchange in the previous Iranian calendar year (ended on March 20) rose 108 percent compared to the preceding year.
During the past year, about 3.5 quadrillion rials (about $83.5 billion) worth of commodities were traded at the mentioned market.