US push for green energy could strand $68 billion in coal, gas assets – report 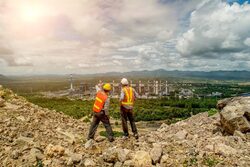 S&P Global Market Intelligence released a new report Friday that estimates that $34 billion in coal plant investment and another $34 billion in new gas plant construction could be at risk.

Recent pollution control investments in the coal fleet may be unrecoverable, S&P reports, and new combined-cycle gas plants built in the Midwest over the last 10 years may also become uneconomic, putting an estimated $68 billion in investments at risk.

While the past decade has seen US electric sector carbon emission declines, attributable mainly to the substitution of coal generation with natural gas generation, recent pricing trends indicate further emissions reductions via this avenue are unlikely, S&P says.

The recent advancement of renewable mandates and regulatory support for retiring coal generation in parts of the country indicate that a new round carbon emissions reductions are on the horizon.
To meet ambitious decarbonization targets such as those in the Biden administration’s Clean Energy Standard, green energy will need to expand much more rapidly.
This push, S&P notes, could reduce the value of recent investments in pollution control equipment at coal plants.

According to the S&P Global Environmental Project Database, over 100 coal power plants totaling 130 GW – more than half the existing US coal-fired fleet – have undergone or are planning to undergo environmental retrofits in some form.

The financial hit of different types of retrofits can vary substantially but retrofits on larger plants to address multiple types of emissions can cost well over $1 billion, S&P reports.
A review of markets with strong renewable mandates and carbon emissions pricing indicates much of the US fleet of recently built natural gas generation could come under pressure as well.

This week, President Joe Biden announced plans to call for half of all vehicles sold in the US to be capable of emissions-free driving by the end of the decade, an ambitious goal that automakers say can only be achieved with bigger government investment in charging stations and other infrastructure.