Permits issued for establishment of 830 industrial units in Semnan province 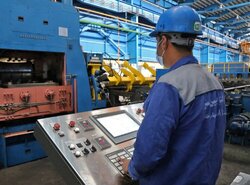 As announced by a provincial official, permits have been issued for the establishment of 830 industrial units in the central Semnan province during the first four months of the current Iranian calendar year (March 21 – July 22).

Faramarz Mahboubi, the deputy head of the province’s Industry, Mining, and Trade Department, put the estimated investment for these units at 69 trillion rials (about $1.642 billion) and job creation at 14,800.

The official said that investment making in the industry sector of the province has risen 271 percent in the first four months of this year, as compared to the same period of time in the previous year.
According to the latest data released by Industry, Mining and Trade Ministry, during the first quarter of the current Iranian calendar year (March 21-June 21) 10,714 permits have been issued for establishing new industrial units in the country, which marked 31.8 percent increase year on year.
The estimated investment making for these units was more than 2.712 quadrillion rials (about $64.571 billion), indicating 162 percent rise year on year.

The units are predicted to create jobs for 288,096 persons, with a 52.4-percent growth.
As announced by Deputy Industry, Mining, and Trade Minister Mehdi Sadeqi Niaraki, the issuance of establishment licenses for industrial units in the country increased 40 percent in the past Iranian calendar year (ended on March 20).

“The number of establishment licenses increased to more than 36,000 last year, which shows that people are encouraged to invest in the productive sectors”, the official has stated.
He also said that over 6,500 new industrial units were established across the country during the past year, which created jobs for over 121,000 people.

The official further said that 1,500 idle industrial units have been revived in the country during the previous year.
Touching upon the Industry Ministry’s plans for the realization of the motto of the current year which is named the year of “Production: support and the elimination of obstacles” by the Leader of the Islamic Revolution, the deputy minister said: “In the year that has been dedicated to the production sector by the Leader of the revolution, the orientation of all government organizations and executive bodies should be towards supporting the country’s industrial and mining units.”

He also mentioned an 85-percent rise in the allocation of land for establishing industrial units across the country and noted that over 4,500 hectares of land were handed over to applicants in the previous calendar year.

According to the official, there are over 46,000 small and medium-sized industrial units in Iran’s industrial parks and zones, of them about 9,200 units are inactive.
Iran’s industrial parks play a significant role in making the country independent through boosting production, which is a major strategy of Iran to combat the U.S. sanctions.

In fact, strengthening domestic production to achieve self-reliance is the most important program that Iran is following up in its industry sector in a bid to nullify the effects of the U.S. sanctions on its economy.