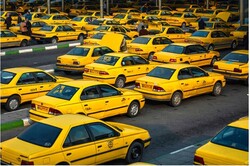 As announced by the managing director of Tehran Omid Karafarini Fund, 10,000 taxies will be renovated in Tehran province by the next 1.5 years.

Farhad Hakim-Nia said the taxies will be renovated through nine trillion rials (about $214.2 million) of investment.
He said that this fund was established to support applicants for facilities that do not fall into the defined categories of bank lending.
Back in March, Iranian Planning and Budget Organization (PBO) and Tehran municipality had signed a memorandum of understanding (MOU) for renovating 31 subway trains and 10,000 public taxis.
The MOU was signed by the former PBO Head Mohammad-Baqer Nobakht and Tehran Mayor Pirouz Hanachi.

As reported, over 100 trillion rials (about $2.3 billion) is allocated only for the renovation of the mentioned 10,000 taxis.
On the same day, Tehran Urban and Suburban Railway Operation Company also signed an MOU with Tehran Wagon Company for cooperation in building 105 wagons for the capital city’s urban railway fleet.

Tehran municipality had previously signed an MOU with Iran Khodro car manufacturing company to meet part of the transport fleet’s need for 3,000 buses.
“Tehran needs 3,000 buses to reduce waiting times at stops so that we will try to achieve this goal”, Hanachi had said in June 2020.