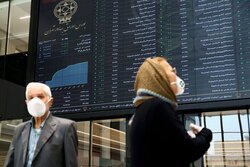 Over 16.056 billion securities worth 142.13 trillion rials (about $3.384 billion) were traded at the TSE on Sunday.
The first market’s index fell 1,867 points, and the second market’s index lost 4,301 points.
TEDPIX rose 50,000 points, or three percent, in the past Iranian calendar week.
The index closed at 1.55 million points on Wednesday (the last working day of the week).

During the past week, the indices of National Iranian Copper Company, Mobarakeh Steel Company, Social Security Investment Company, Iran Khodro Company, and Barekat Pharmaceutical Group were the most widely followed indices.
Iran’s new Minister of Finance and Economic Affairs Ehsan Khandouzi has underlined the capital market as one the major priorities of his ministry during his tenure, outlining the programs for improving this market.

According to Khandouzi, the stock market is one of the most important pillars of the economy as it will play a significant role in financing government projects and supporting economic growth.