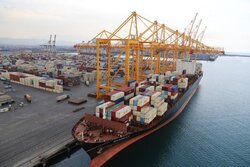 By promoting economic diplomacy, we can develop relations with neighboring countries, which will also lead to prosperity for the free zones”, Hossein Garousi, the acting managing director of Arvand Free Zone Organization, stated.

Diplomacy should not be just political," he said, adding, "We need economic diplomacy, especially with neighboring countries to improve people's livelihoods”.
The creation of joint free zones could expand relations and improve economic conditions, the official noted.
He described the free zones as an opportunity for the country, and said that the full implementation of the law on how to manage free zones can remove existing problems and obstacles.

Arvand Free Trade Zone is located in Iran’s southwestern province of Khuzestan.
The establishment of free trade zones (FTZs) in Iran dates back to the Iranian calendar year 1368 (March 1989- March 1990) following the fall in the country’s oil income in the preceding year which prompted the government to promote the non-oil exports.

As announced by Secretary of Iranian Free Zones High Council Hamidreza Mo'meni in mid-July, some new free trade zones are planned to be set up in the country in the current Iranian calendar year (March 20, 2022).
Saying that new FTZs will be set up based on the order of the president, the official said: “If we can settle the subject of the comprehensive plans of these zones, I think by the end of this year, the new free zones will be added to the existing ones.”
According to Mo’meni, the trade balance of the country’s free trade zones and special economic zones has been positive over the past three years.

“With the measures taken for the promotion of exports in the country, the trade balance of the free trade and special economic zones has become positive over the past three years,” the official said.
“However, there are still weaknesses in the first and second generation of the country’s free trade and special economic zones, which we will try to minimize by improving the infrastructure in these zones”, he reiterated.
He said that the country’s free trade zones lack a comprehensive development plan which means the managers of each zone act based on their own preferences.

Exports, transfer of technical knowledge, attracting domestic and foreign investment, and creating sustainable employment are among the expectations from free trade zones, and in order to prepare a comprehensive plan for the development of free zones, these issues should be considered for the next 50 years.
“If we can settle the subject of the comprehensive plans of these zones, I think by the end of this year, the new free zones will be added to the existing ones,” Mo’meni stated.