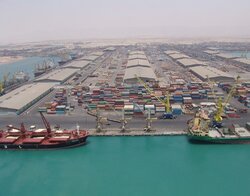 Managing Director of Iran’s Persian Gulf Mining and Metal Industries Special Economic Zone (PGSEZ) has said the necessary infrastructure including water, electricity, and natural gas supplies have been provided in the region and the zone is ready for attracting investment.

As IRNA reported, Hassan Khalaj Tehrani said in recent years, PGSEZ has laid the necessary groundwork for attracting investment in the field of mining and mineral industries with the aim of making optimal use of the development capacity of this region.

“Improving infrastructure (water, gas, electricity and land supply), facilitating the business environment and reducing administrative bureaucracy and granting banking facilities to the manufacturing sector are among the factors provided for attracting investment in the region,” the official said.

"Last year, nine investment contracts were signed and in the first quarter of the current year (March 21-June 21), eight more contracts were signed," he added.
According to the official, with the completion of projects implemented in the last 16 months, the amount of investment in this zone will reach $6.1 billion and jobs will be created for about 1,700 people.

“With the removal of investment barriers, the volume of investment is expected to increase this year, also the issue of technology transfer and technical knowledge as one of the positive consequences of investing in the region will lead to increased revenue,” Khalaj Tehrani stated.