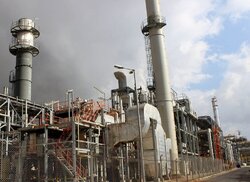 Abbaszadeh said the country’s share of petrochemical trade in the region was 20.2 percent in the Iranian calendar year 1398 (ended in March 2020) and it reached 22.1 percent at the end of the previous fiscal year (March 2021), indicating a two percent growth.

“In terms of production capacity, Iran had a 2.5 percent share of world petrochemical production in 1398, which increased to 2.7 percent at the end of last year following the implementation of the projects defined for the second leap of the petrochemical industry,” the official said.

Iran's share of the world's petrochemical production capacity is increasing while most countries are working to upgrade their capacity, he added.
According to Abbaszadeh, the Islamic Republic accounted for 24.9 percent of West Asia’s total petrochemical production in the Iranian calendar year 1398, while the figure reached 26.5 percent at the end of the previous fiscal year.

According to Abbaszadeh, by the end of the Iranian calendar year 1404 (March 2026), the production capacity of petrochemical products in Iran will increase to 136 million tons and the total revenues of this industry will reach $37 billion.

Petrochemical is Iran's most important industry after oil and gas. The National Petrochemical Company hopes to lift output capacity to 120 million tons per annum by 2022.

The industry has played a key role in domestic economic growth as it creates value-added and reduces the sale of oil and gas on which the economy has been dependent for decades.
With abundant hydrocarbon reserves and new private sector investments, Iran is working hard to maintain its global status in this key sector and broaden its scope.