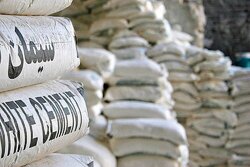 The supply of cement in the commodity exchange ensures the rights of producers and consumers, the secretary of Iran’s Cement Industry Employers Association has stated.

He described the requirement of production units to offer their products in the commodity exchange as a right decision and added that the supply of a part of cement in the exchange causes the product to become multi-priced and is exploited by profiteers and brokers.

The market of cement, which is one of the most important constructional materials, has witnessed huge turmoil in Iran in the past three months, that has been unprecedented in the history of production and consumption of this product.

The price of cement, that was 2.2 million rials (about $52.3) per ton at the beginning of the current Iranian calendar year (late March), fell to 1.2 million rials (about $28.5) in a period of less than three months, which led to the closure of ready-mixed concrete production plants and the cessation of concrete pouring in the constructional projects, and these closures continue.

The reason behind this condition is said to be offering cement on Iran Mercantile Exchange (IME), something arousing many debates.
Some experts and also those active in the cement market say that ordinary pricing for cement has always challenged producers, so this product is offered on the commodity exchange.
Gholamreza Shariati, a member of the parliament’s development committee, is one of those supporting this idea.

He says cement is one of the basic commodities that should be offered in the commodity exchange and get rid of government pricing. Market surveillance should replace dictatorial interference in commodity price trends.

Achieving transparency in trades is made possible by the supply of cement on the stock exchange, he believes.
Referring to the opponents of offering cement on the commodity exchange, the MP says, “Some profiteers who suffer from the transparency of the cement trading process are looking to create chaos in the market”.

Alireza Asgari Marani, a capital market expert, is another person supporting the idea of offering cement on the IME.
In a recent published essay titled “Why the supply of cement in the commodity exchange helps the national economy?”, the expert says:
“Since last year, due to the structuring that was done in some of the large cement holdings, more supervision over the sales and cash sales cycle began gradually.

And further, with the continuation of the entry of a number of products of those companies in the commodity exchange, it causes the transparency in the market of this national product, which is worth over five billion dollars in GDP.

Gradually, it moved a way that could be followed by a reconstruction of the existing units to increase the capacities and a semi-finished development plan in line with the production leap.

Although, the unfair power outage in this industry and the steel industry, without observing fairness compared to the rest of the industries, caused the production of this product to stop and consequently disrupt the supply and demand mechanism in the high consumption seasons (spring and summer), and the excuse of shortage and price increase was provided by the permanent rent-seekers of this strategic commodity, so that they could continue their corruption and rent-seeking by appearing in the corridors of the Ministry of Industry and Mining and chanting deceptively popular slogans.”

On the other side, there are those opposing the offering of cement on the commodity exchange.
They say that the beginning of this strange crisis in the cement market was the arbitrary decision of cement factories to change the pattern of sales and listing cement on the commodity exchange.
The decision that according to the minister of transport and urban development, was made and implemented without observing the rules and regulations of the country, and despite the opposition of this ministry and even the market regulation headquarters, and the condition has not returned to its previous routine.

One of the cement distributers in Tehran city also criticizes the process of offering cement on the IME, saying, “Under no circumstances the ordinary people are able to enter the stock market. We arrive at the stock exchange early in the morning. The big investors buy the cement production line together and then sell it to us at several times the price; Only if we get a chance and the goods reach us.”

Such opponents say that although offering cement and also steel on the IME could have helped producers, housing builders and buyers by eliminating intermediaries, this remains a matter of concern so far.

Meanwhile, one of the current problems is the supply of half-and-half of cement in the stock market, with some cement entering the stock market and others being sold directly. This causes the market of this product to be affected by stock market rates and creates a price distortion.

It is said that the entry of cement into the stock market has been adopted and implemented without observing the rules and laws of the country.