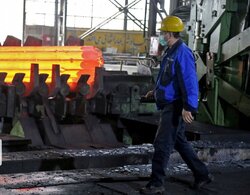 By continuously monitoring the production status of major industrial products and accelerating the supply of raw materials required by producers, we try to continue and maintain the upward trend of growth in the industrial sector,” Niaraki said. He also pointed to the good performance of the mentioned sector in the first four months of the current Iranian calendar year (March 21-July 22) and said: "In this period, due to the investments made and the inauguration of more than 2,000 production units, over 54,000 jobs were created, which compared to last year, we saw a growth of about 46 percent in creating industrial employment in the country.”

He called on all entities and organizations to cooperate for supporting the country’s industrial sector and expressed hope that the upward trend of the mentioned sector will continue in the second half of the current fiscal year.

CBI, in its latest report, put the growth of the country’s Gross Domestic Product (GDP) in the first three months of the current Iranian calendar year at 6.2 percent. According to the mentioned data, the figure was 4.7 percent with oil excluded.

During the said period, with the exception of the agricultural sector which experienced negative growth of 0.9 percent due to the drought and reduced crop production, other economic sectors, including oil, industries, and mining and services experienced growth.