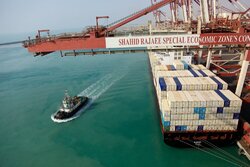 As announced by an official with Iran's Ports and Maritime Organization (PMO), 694,450 twenty-foot equivalent units (TEUs) of commodities have been loaded and unloaded at Shahid Rajaee port, in the south of country, during the first five months of the current Iranian calendar year (March 21-August 22).

Farhad Montaser Kouhsari, the PMO’s deputy Head for Ports and Economic Affairs, said that Shahid Rajaee port (Iran’s most equipped and largest container port) accounted for the highest amount (87 percent) of container operation conducted in the ports of country during the five-month period.

As the official has stated, container operation has increased 13 percent in the ports of Iran during the first five months of the current calendar year, as compared to the same period of time in the past year.

He has announced that 906,218 TEUs of container goods have been unloaded and loaded in the country's ports.
“This growth rate occurred while most of the country's ports were facing the situation of red indicator of coronavirus infection, but with the planning and observance of health procedures, we saw an increase in container performance in the country's maritime sector”, he highlighted.

In this regard, the completion and operation of the third phase of the container terminal of Shahid Rajaee port is one of the measures that with its operation, the capacity of this port will increase from 6.5 million TEUs to 8.5 million TEUs, he added.

Meanwhile, loading and unloading of goods in the ports of Iran rose 14 percent during the first five months of the current Iranian calendar year, as compared to the same period of the previous year, the portal of the Ports and Maritime Organization has previously reported.

According to PMO’s Ports Affairs Director Ravanbakhsh Behzadian, loading and unloading of goods at the country’s commercial ports reached 58.99 million tons in the mentioned period, while the figure stood at 51.73 million tons in the past year’s same five months.

He noted that the loading and unloading operations in the dry bulk sector grew by six percent in the mentioned period compared to the last year’s same time span, while in the liquid bulk sector the figure increased by 47.9 percent, in the general cargo sector the growth was 19.4 Percent and the petroleum sector also experienced a growth of 22.6 percent compared to the same period last year.

While Iran is combating the U.S. unilateral sanctions on its economy, the country’s ports as the major gates of exports and imports play some significant role in this battle. This role makes all-out support to ports and more development of them serious and vital.

Such necessity has led the government to define projects for more development of the ports and also take some measures to encourage investment making in ports, in addition, to facilitate loading and unloading of goods, especially basic commodities, there.

It is worth mentioning that PMO has defined a high number of projects to develop and improve the country’s ports, as the country aims to double the capacity of its ports in a course of five years.
Meanwhile, as Kouhsari announced two weeks ago, the PMO plans to modify the financial framework of its operatory contracts.

Given that the framework of PMO contracts has been drafted in the past, there is a need to quickly review and update existing contracts to address the recent challenges posed by sanctions and rising exchange rates, the official said.

“The private sector has been investing in ports in the face of sanctions and the outbreak of the Covid 19 pandemic, and it is therefore necessary to pay serious attention to their problems and issues,” he added.

He emphasized that one of the programs of the Ports and Maritime Organization is to change and upgrade the existing contracts of the current port operators at Shahid Rajaee port from short-term management contracts to long-term investment and BOT contracts that would be proportional to the amount of investment.

"If the contract is short-term, port operators will not have a proper security margin," he said.
According to the official, the operators of the mentioned port have contracts that expire in the Iranian calendar year 1402 (begins in March 2023) and PMO expects them to renew their contracts.

“By modifying and reviewing port contracts and optimal management of them, monitoring the implementation of investment companies’ obligations, especially in providing non-strategic equipment and supplying equipment shortages in ports will be eliminated,” Kouhsari said.