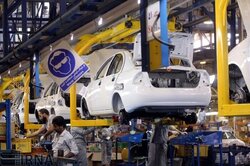 Iran currently stands in 20th place among the world’s top automobile manufacturers producing 821,060 vehicles by the end of 2019, according to the Organisation Internationale des Constructeurs d'Automobiles (OICA), worldpopulationreview.com reported.

Based on the OICA data, China is the world’s largest producer of vehicles, manufacturing over 21 million cars and 4.36 million commercial vehicles. The largest domestic car manufacturers in China, known as the traditional “Big Four,” are SAIC Motor, Dongfeng, FAW, and Chang’an.

The United States is the second-largest car producer in the world, although it produces less than half of what China does, manufacturing over 2.5 million cars and 8.37 million commercial vehicles.

According to the Codal portal data, the production by the mentioned companies has decreased by 0.83 percent compared to the previous year’s same five months in which the output stood at 348,303.
During the said five months, IKCO manufactured 169,956 vehicles, 891 vehicles more than the same period last year.

Back in August, Iranian Industry, Mining, and Trade Minister Seyyed Reza Fatemi Amin said that his ministry has a two-year plan for the auto industry based on which this industry will undergo serious changes and improve significantly.

“We must strengthen competition, improve management and economic mechanisms, and increase production in the auto industry in order to succeed in our plans,” Fatemi Amin said.