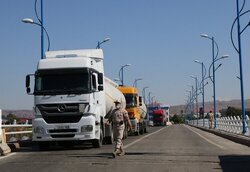 Head of the Islamic Republic of Iran Customs Administration (IRICA) Mehdi Mirashrafi said good agreements have been reached with Armenia on the development of customs cooperation as well as the use of alternative routes for the transport of goods.

Mirashrafi who visited Moscow on Sunday to attend an international customs conference noted that Iran has diversified its international routes so that no single route could impose a limitation on the country’s international trade.

Earlier this month, Deputy Transport and Urban Development Minister Kheirollah Khademi had announced an agreement between Iran and Armenia for establishing new transit routes, as the two countries are facing problems in trade exchanges through Azerbaijan.

“The alternative transit route for Iranian trucks in Armenia will be asphalted within the next month, and there will be no need to use the previous route which passes through Azerbaijan and requires us to pay tolls to the country,” Khademi said.

Azerbaijan is controlling and claiming ownership for approximately 20 km out of a 400 km route between Iran and Armenia and has imposed strict regulations on Iranian drivers which are posing major problems for them passing through the 20-kilometer section of Armenia’s Goris-Kapan Road including paying tolls levied by Azerbaijani border guards.

Referring to the importance of land crossings for the export and import of goods between Iran and Russia, the official said: "Completing the maritime and road infrastructure and providing more customs facilities, especially in the Caspian Sea region, can increase trade [between the two countries]."
In addition to ground roads, Iran has routes in the Caspian Sea through Ro-Ro ships to Azerbaijan Republic, Russia, Turkmenistan, and Kazakhstan, Mirashrafi added.