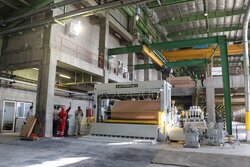 During an open session of Majlis (Iranian parliament) on Sunday, the MPs approved the general outlines of a bill on supporting the country’s factories and production units, IRNA reported.