Over 16m tons of steel ingots produced in 9 months 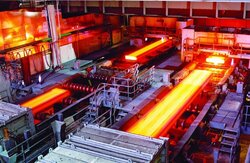 As reported, the nine-month steel ingot output indicates a five-percent drop year on year.
Major Iranian steel producers had produced over 22.54 million tons of steel ingots in the previous

Iranian calendar year (ended on March 20, 2021), registering an eight percent rise year on year.
The said companies produced over 2.04 million tons of steel ingots in the last month of the previous year (February 19-March 20, 2021), 17 percent more than the figure for the same month in the preceding year.

Mobarakeh Steel Company had the best performance in the previous calendar year with a production of 9.8 million tons of the mentioned product while the highest production growth was registered by Sirjan Steel World Company with 141 percent growth.

After the withdrawal of the United States from Iran’s nuclear deal, the Islamic Republic has faced sanctions in various industries, including steel sector.
The United States has sanctioned entities and individuals associated with Iran’s steel industry.

In January 2021, the U.S. Department of the Treasury’s Office of Foreign Assets Control (OFAC) added twelve Iranian producers of steel and other metal products to the list of sanctions.
However, at that time, the U.S. experts said that the Islamic Republic of Iran had resisted the so-called U.S. maximum pressure policy for the past three years, and the Trump administration had failed to achieve any of its goals in the face of sanctions against Iran.

Also, those active in Iran’s steel sector believed that sanctions against Iran which were in place for 40 years had nothing to do with the Iranian industry.
For example, referring to Iran's success in steel production in the country, the vice president of the

Iranian Steel Producers Association (ISPA) stated: “Iran is one of the 10 top steel producing countries in the world and no doubt U.S. sanctions will not take special action against Iran's steel industry at this stage.”

“Iran's ranking among the top 10 steel producers in the world shows that the decline of Iran's position among steel producing countries will not be easy”, Bahador Ehramian noted.

And now, it’s proven based on the repots and statistics released by the international bodies and also the Iranian sources that Iran’s strong steel sector cannot be hit by the sanctions.
Based on the Iranian Steel Producers Association’s data, Iranian steel companies managed to produce 30.2 million tons of steel in the previous Iranian calendar year, registering a three-percent annual growth.

And according to the latest report released by the World Steel Association (WSA), Iran has maintained its place as the world’s 10th biggest steel producer during January-October, 2021.
Production of crude steel in Iran reached 22.4 million tons during the mentioned time span to register a 5.7-percent decline year on year, the report said.

The rising trend is also witnessed in the export of Iran’s steel, as according to the latest report released in this due, Iranian major steel producers, including Mobarakeh Steel Company, Khuzestan Steel Company, Esfahan Steel Company, and Hormozgan Steel Company and some others, exported over 5.912 million tons of steel during the first seven months of the current Iranian calendar year (March 21-October 22, 2021), which was 30 percent more than the figure of the same period of time in the past year.