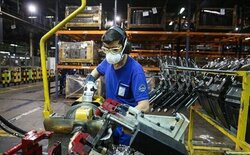 Iran’s Deputy Industry, Mining and Trade Minister Mehdi Niazi has outlined the details of his ministry’s roadmap for the development of the country’s trade and strategic industries, the portal of the Industry Ministry reported on Monday.

According to Niazi, the strategic roadmap of the country's industry will have an international and foreign trade dimension as well as a domestic aspect which is concerned with industrial activities inside the country, especially strategic industries such as the automotive sector.

There should also be a regional and spatial planning-based approach involved in the development of this roadmap, the official said.

He further stated that several such roadmaps and comprehensive programs have been defined in his ministry over time but none of them have been successful in implementation.
“[In drafting the new strategic roadmap] we were supposed to have a comprehensive and strategic view of all aspects of the industry so that we would not face any obstacles in implementation,” he added.

Niazi said the Industry Ministry also plans to use the views and opinions of the private sector representatives in the preparation of the mentioned roadmap.

"Some provisions may require a law or government decree, but we will try to prepare the initial draft and documentation of this strategic roadmap as scheduled," he stated.
Back in September 2021, Deputy Industry, Mining, and Trade Minister Mehdi Sadeqi Niaraki said his ministry has defined 36 new programs for improving the productivity of the country’s major strategic industries.

Niaraki said the Industry Ministry’s programs for supporting the productive sector focus on three major axes including the facilitation of supplying raw materials required by industries including equipment, machinery, components, and parts as well as planning to provide the working capital needed by the production units.

Mentioning the preparation of the roadmap for strategic industries as another major ax of the Industry Ministry’s planning, the official said: "36 programs have been defined in the industry, mining, and trade sectors for supporting strategic industries such as automotive, home appliances, textiles, and clothing, chemicals, pharmaceuticals, and medical equipment."