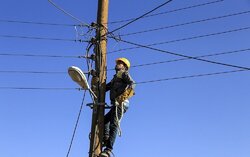 Iranian Energy Ministry has managed to connect 210 villages with 3,000 households to the national electricity network since the beginning of the current Iranian calendar year (March 21, 2021), IRNA reported.

As reported, over 1.5 trillion rials (about $5.3 million) has been invested for the implementation of the mentioned electricity supply projects.

The said electricity supply projects have been implemented by constructing 406 kilometers (km) of medium pressure power transmission lines and 108 km of weak power lines.
Also, 250 transformers with a total capacity of 11,000 kWh have been installed to supply electricity to the mentioned rural areas.

Supplying electricity to rural areas and increasing the country’s power generation capacity were among the top priorities of the new Energy Minister Ali-Akbar Mehrabian when he announced his ministry’s major programs during his tenure, back in August 2021.

In November 2021, Mehrabian had announced that his ministry was planning to construct and put into operation 21 new power plant units by the next summer’s peak consumption period (Iranian calendar’s summer begins on June 22).

The minister reiterated that his ministry was following a comprehensive program for adding 30,000 MW to the country’s power generation capacity by the end of the current government incumbency.

"Currently, for the next year’s summer peak [consumption period], we are taking the necessary measures to bring 21 new [power plant] units on stream; Of course, the exact schedule for the operation of these units is prepared and will be provided in the form of weekly reports,” he said.

He further noted that the construction of 10,000 MW capacity of power plants has also been started by various industrial sectors, saying: “four major industries have started their work in the field of power plant construction. Based on the contract concluded with these industries, the said industries will not be provided with electricity from the national grid if they cannot deliver the power plants based on the specified schedule.”