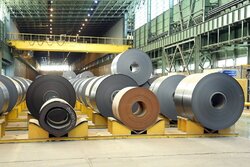 Iran exported over 6.049 million tons of steel during the first ten months of the current Iranian calendar year (March 21, 2021-January 20, 2022), which was 11 percent more than the figure of the same period of time in the past year.

Slab produced by Sirjan Jahan Steel Company registered the highest export rise in the mentioned period, as the export of product rose 150 percent.

As reported, steel export fell 10 percent in the tenth month of this year from that of the previous year.
According to the Iranian Steel Producers Association (ISPA), Iranian exports of steel during the previous Iranian calendar year declined 13.1 percent compared to the figure for the preceding year.
Based on the association’s data, the country exported nine million tons of steel in the previous year.
Over 2.839 million tons of steel products were also exported in the mentioned year, registering an 18-percent decline year on year.

The country is expected to climb to seventh place among the world’s top steel producers by the Iranian calendar year 1404 (March 2025).

Based on the latest report released by the World Steel Association (WSA), Iran has maintained its place as the world’s 10th biggest steel producer during January-October, 2021.
Production of crude steel in Iran reached 22.4 million tons during the mentioned time span to register a 5.7-percent decline year on year, the report said.