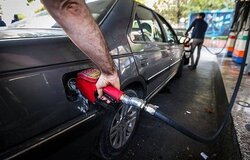 According to Keramat Veis-Karami, average daily gasoline consumption in the country reached 112 million liters during the mentioned 17 days, while the figure stood at 88 million liters in the previous year’s same period, Tasnim news agency reported on Sunday.

The official noted that despite the significant increase in consumption, gasoline supply was carried out smooth and uninterrupted.
In late March, Veis-Karami had put the average daily gasoline consumption in the country at 113 million liters.

Having a production capacity of nearly 120 million liters per day of gasoline, Iran currently has also the capacity to store three billion liters of the strategic fuel.

These tanks will help the country’s refineries continue operating at full capacity if on certain days of the year (such as the Nowruz holidays) gasoline consumption rises significantly, and also prevent any interruption in the supply of the fuel if consumption increases drastically.
In this regard, the capacity of the country’s gasoline storage facilities has increased in recent years, so much so that according to the National Iranian Oil Products Refining and Distribution Company, the volume of gasoline storage has increased from 1.8 billion liters to more than three billion liters.

According to the former NIORDC Managing Director Alireza Sadeq-Abadi, Iran is currently the biggest producer and exporter of gasoline in West Asia.
The country has achieved this success despite the external pressures and hurdles imposed by the U.S. sanctions on its oil industry.

The significant increase in the country’s gasoline production and exports came despite the fact that nearly two years ago Iran was an importer of the strategic product, shipping in 17 million liters per day of gasoline.