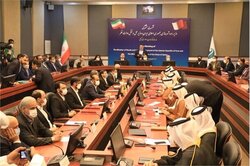 Qatar's minister of transport and communications has expressed his country’s willingness for the expansion of maritime ties with Iran’s southern coastal provinces in a meeting with the Iranian transport and urban development minister.

Speaking in this meeting, Qasemi referred to the signing of 14 memorandums of understanding (MOU) between the two countries during the visit of Iranian President Ebrahim Raisi to Doha, and stressed: "[implementing] the memorandum of understanding on maritime cooperation between the two countries and the facilitation of trade and tourism are among the most important issues currently discussed."

Qasemi also mentioned the implementation of the mentioned memorandum of understanding during the visit of a Qatari delegation to Iran, and noted: “Due to the boom in trade between Iran’s Dayyer port and Qatari ports, the issue of equipping this port’s customs with X-ray monitoring devices is underway.”

Stating that the coastal provinces of Iran can have extensive trade with Qatari ports, the official added that the International Imam Khomeini port in Khuzestan province can be a great source and destination of trading goods with Qatar.
Referring to the proximity of Bushehr province’s ports to Qatari ports, Qasemi also underlined the important role of Hormozgan province’s commercial ports, including Shahid Rajaei container port, in the expansion of trade exchanges with Qatar.
He further noted that 500,000 Iranian tourists are expected to visit Qatar to watch the FIFA World Cup games.

“Given the Qatari government's interest in joint cooperation between Tehran and Doha to support the World Cup 2022 and the use of Iran's tourism infrastructure, we hope that with the signing of cooperation agreements between the two sides executive issues will be pursued quickly,” the Iranian minister said.