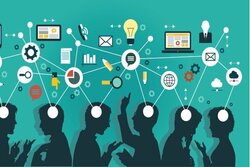 Iranian Industry, Mining, and Trade Minister Reza Fatemi-Amin has said the exports of knowledge-based products is one of the country’s new priorities in setting foreign trade policies for the current Iranian calendar year (started on March 21), IRIB reported.

One of our priorities in foreign trade is to export knowledge-based goods instead of raw or semi-raw materials,” Fatemi-Amin said on Thursday. “This year, considering the slogan of the year which is “Production: Knowledge-Based and Job-Creating”, we are completely revising the criteria for selecting the country’s top exporting companies, so that companies exporting knowledge-based goods are given more importance and would be among the top manufacturers,” the minister said.
According to the official, so far, knowledge-based industries have been mostly supply-oriented, which means a knowledge-based company worked on a product, process, or service, and the ministry sought to provide a market for it, but now the companies are moving toward becoming demand-oriented.

Large companies in various areas like the automotive, mining, and food industries need to re-define their processes to reduce prices and increase quality, and also implement new processes to move towards research and knowledge-based development, Fatemi-Amin stressed.
The official further mentioned attending a meeting with the representatives of over 30 major companies in which issues, ideas, and challenges in the way of the development of knowledge-based companies have been raised and discussed.

He noted that in case of the knowledge-based development of the country’s major industries, small companies can also cooperate with them in their projects, and this will have a great impact on the country’s economy.
The minister finally stated that the ministry should encourage competition among production units, adding that major companies can also move toward manufacturing their own needed machinery and equipment as well.

The minister’s statements were in line with the slogan of the present Iranian calendar year 1401, which is named “Production: Knowledge-Based and Job-Creating” by Leader of Islamic Revolution Ayatollah Seyed Ali Khamenei.