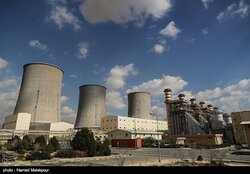 According to Abdolmaleki, turning gas power plants into combined cycle ones is one of the most efficient ways to improve the efficiency of the country's electricity network, which is very effective not only for the electricity industry but also for preserving the environment and saving fuel.
“By placing a 160-megawatt steam turbine along with two 159-megawatt gas turbines and forming a complete combined cycle block, the power plant's efficiency increases from 34 percent to nearly 50 percent without the need for additional fuel and only by using the heat recycled in the first cycle of power generation,” he explained.

In the past decade, constant temperature rising and the significant decrease in rainfalls across Iran have put the country in a hard situation regarding electricity supply during peak consumption periods.
Earlier this month, Iranian Energy Minister Ali-Akbar Mehrabian said the country’s electricity generation capacity was going to increase by 6,000 megawatts (MW) by the end of spring (June 22) in order to meet the summer’s peak demand.

Mehrabian noted that 4,500 MW of the mentioned figure will be provided through developing the country’s thermal power plants and another 1,000 MW will also be provided by implementing overhaul operations, while the other 500 MW is going to be supplied by new renewable power plants.