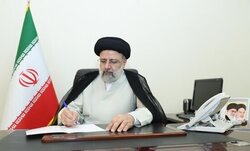 Iranian President Ebrahim Raisi has tasked the Trade Promotion Organization (TPO) to establish a specialized committee for addressing foreign trade issues and removing barriers in the way of the country’s traders, the TPO portal reported.

Speaking in a cabinet meeting on Wednesday, President Raisi underlined the need to make the best use of the capacities of the private sector in developing trade relations with the countries in the region and instructed TPO Head Alireza Peyman-Pak to form the mentioned committee to identify problems and obstacles in this regard.

TPO has been taking new steps for promoting Iran’s foreign trade over the past few months.
Earlier this month, the organization signed a memorandum of understanding (MOU) with the Iranian Committee of the International Chamber of Commerce (ICC Iran) to cooperate in the facilitation and development of the country’s international trade.
The MOU was signed by Peyman-Pak and Secretary-General of ICC Iran Mohammad Khazaei on Monday, the TPO portal reported.

Cooperation in developing the application of new trade tools and knowledge-based solutions to enhance the export potential of Iranian companies, promoting the application of new financial technology tools to facilitate foreign trade, holding training courses required by the country’s businessmen and exporters, providing legal and trade advisory services to traders and businessmen, cooperation in resolving disputes between Iranian businesses with foreign parties using non-judicial methods within the framework of the ICC Iran and TPO duties are mentioned as some of the areas that the two sides are going to cooperate on based on the signed MOU.

Furthermore, developing and facilitating Iran's trade relations with other countries, translating and localizing ICC’s international agreements within the framework of the ICC regulations, providing advisory assistance by the ICC Iran to TPO for the development of international trade, cooperation with companies, and facilitating and encouraging their membership in the International Chamber of Commerce, cooperation in translation and publication of reports and statistics published by the International Chamber of Commerce, cooperation and planning in holding joint business events, cooperation in the development of international trade using the capacities of both institutions, coordination, and cooperation for exchanging trade delegations within the framework of the duties of the Iranian Committee are also among the provisions and areas of cooperation.