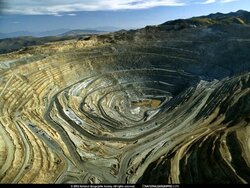 Iranian Mines and Mining Industries Development and Renovation Organization (IMIDRO)’s data shows that new mineral reserves worth over $28.7 billion have been discovered across the country over the past eight years.

Having 81 different types of minerals, Iran is one of the top 10 mineral-rich countries across the globe. In this regard, the Iranian government has been seriously pursuing several programs for promoting the mining sector as a major contributor to the country’s economic growth.
Iran's proven iron ore reserves are 2.7 billion tons, while the country’s copper reserves are 2.6 billion tons. The country also has 11 million tons of zinc reserves.