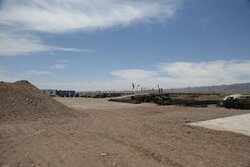 Saying that the lands for the construction of 2.8 million units of the National Housing Movement have been provided, Mahmoud Mahmoudzadeh said that lands will be provided for all four million units by the end of Shahrivar.

As announced by Alireza Jafari, the managing director of New Towns Development Company, the construction of the mentioned units was started in the new towns of East Azarbaijan, West Azarbaijan, Isfahan, Alborz, Bushehr, Tehran, Khorasan Razavi, Khuzestan, Sistan-Baluchestan, Fars, Markazi and Hormozgan provinces.
Back in mid-April, Mahmoudzadeh had announced the definite allocation of about 980,000 land lots with residential use in the previous six months for the construction of National Housing Movement units.

He said that 1.4 million land lots have been also identified that their usage should be determined, or they should be added to the area, or be investigated technically by the provincial planning councils and the Supreme Council of Architecture and Urban Planning.
According to the deputy minister, out of the four million units that are to be built in four years, 3.2 million are in urban areas and 800,000 in the rural regions.
The provided lands are the lands of the Ministry of Transport and Urban Development and so far, no land has been provided from other organizations, the official further stated.