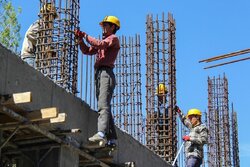 The executive operation has been started for the construction of 3,816 units of National Housing Movement in Isfahan province.

Alireza Qari-Qoran, the director-general of the province’s Transport and Urban Development Department, has stated that of the four million housing units of the National Housing Movement plan, 250,000 units is the share of Isfahan province, for which about 422,000 people have registered.
As announced in a meeting to review the strategies for organizing the housing market, the first series of National Housing Movement units will be delivered to the applicants in the second half of the present Iranian calendar year (September 23, 2022-March 20, 2023).

The mentioned meeting, held on June 15, was attended by Transport and Urban Development Minister Rostam Qasemi and Vice President for Economic Affairs Mohsen Rezaei.
On June 11, transport and urban development minister announced that 1.35 million units of National Housing Movement are currently under construction throughout the country and the number is increasing every day.

‘Decline in housing prices to continue in next 2 years’