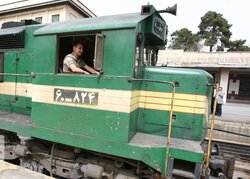 The head of the Industrial Development and Renovation Organization of Iran (IDRO) has said domestic production of wagons and locomotive axels saves the country five million euros a year, IRNA reported.

Speaking to the press on the sidelines of a visit to the 9th International Exhibition of Rail Transportation, Related Industries and Equipment of Iran on Friday, Ali Nabavi said Esfarayen Industrial Complex which is a subsidiary of IDRO has the capacity to manufacture 7,000 axels per year which can meet part of the domestic needs.

Meanwhile, IDRO Deputy Head Farshad Moqimi also mentioned the inauguration of the country’s first forged monoblock wheels factory with a production capacity of 25,000 wheels per year.
The country's annual demand for monoblock wheels is estimated at about 25,000 to 30,000 units, which would lead to more than 20 million euros of imports annually considering the global production price per wheel, according to Moqimi.
Increasing rail transportation of basic goods on the agenda

Head of the Islamic Republic of Iran Railways (known as RAI) Miad Salehi also paid a visit to the mentioned exhibition on Friday during which he announced President Raisi’s order to set the rail transportation of basic goods as a priority in the current Iranian calendar year (started on March 21).
“The government's view is to develop the railway fleet, especially the freight and cargo fleet because it plans to increase the current 10 percent share of the railways in transporting basic goods,” Salehi said.
The President emphasizes the maximum use of the country's railway network capacities. Therefore, RAI has tried to neutralize sanctions and remove obstacles to the domestic development of rail transportation, he said.
Iran-made locomotives: cheaper and more reliable

Elsewhere on the sidelines of the Railway Industry Exhibition, a member of the country’s Rail Transport Companies Association said Iranian locomotives can be produced and presented to the market at a price 25 percent less than the similar foreign models.
This makes Iranian locomotives more economical considering the country’s current economic situation, Ghasem Abdollahi said.

“Plans have been made for the production of locomotives inside the country. The locomotive industry is at the top of the rail transportation industry, and due to the problems related to sanctions and issues related to supplying foreign currencies for the imports of locomotives, the production of Iranian locomotives is being seriously pursued,” Abdollahi stressed.
The 9th International Exhibition of Rail Transportation, Related Industries and Equipment of Iran was held during May 24-27 at Tehran Permanent International Fairgrounds.

As reported by the Iran International Exhibition Company portal, over 86 companies participated in the current year’s railway transportation exhibition.
After the U.S. re-imposed sanctions on the Iranian economy, a national determination was formed inside Iran for empowering its domestic production to achieve self-reliance.
Since then, the national will for independence has become stronger and the Iranian industry has invigorated production in different sectors.
The railway is one of the sectors in which such status is outstanding, as self-reliance has been achieved in some major areas of this sector.
From domestic manufacturing of parts and equipment to rail tracks, wagons, and locomotives, self-reliance is now being witnessed in the railway sector.