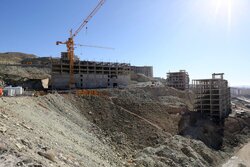 The operation for the construction of 209,212 residential units of National Housing Movement began in early February.
The ceremony to begin the mentioned operation and also to launch some development projects in the housing sector was attended by Transport and Urban Development Minister Rostam Qasemi.
National Housing Movement to construct four million housing units in four years is one of the major plans of the current government in the housing sector.

According to the plan, out of these four million residential units, 3.2 million units will be constructed in cities and 800,000 units in villages, some of these units are currently being constructed after providing lands and preparing the necessary conditions.
Land supply was the first condition for the realization of the national movement plan and housing construction, in this regard, a series of measures were taken by the government and Ministry of

Transport and Urban Development. According to the latest statistics, the lands of 2.8 million housing units of National Housing Movement have been provided by the ministry.
Although, studies show that the provision of land and financial resources are two serious obstacles to the construction of this number of residential units.

Last week, Mohammad-Saleh Jokar, a member of the parliament, said that the young people are having trouble paying the National Housing Movement installments.
Referring to the difference between the implementation of Mehr Housing Plan (initiated in the previous government) and National Housing Movement, he said: "Today, a young man with a monthly salary of between 50 million-60 million rials (about $190-$230) has very difficult conditions for the installments of this plan, which should be considered to solve this problem”, the MP criticized.
And they are not the only problems of National Housing Movement. Another issue that has affected the future of housing and raised uncertainties is construction cost, for which different prices are offered and has led some contractors to separate.

In late April, Farshid Pour-Hajat, the secretary of Mass Builders Association, while referring to the difference in pricing for housing construction between the government and the private sector, said: "Over the past years, there has been a fundamental difference in the cost of housing in the housing construction plan such as Mehr housing from Ahmadinejad's government. In the thirteenth government, a national action plan was provided for the provision of housing to the target groups, and after holding meetings with mass builders, these contractual objections were resolved within six months. But, unfortunately, the pricing type and method of calculation has not been reviewed.”
Meanwhile, during a meeting held last week on discussing the housing problems, Ali Nikzad, the deputy parliament speaker, stressed, “We should try to reduce the cost of building in the national housing and make this plan economically justified for the applicants”.