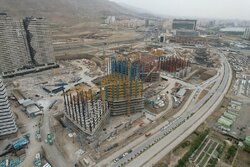 Transport and urban development minister said that 1.35 million units of National Housing Movement are currently under construction throughout the country and the number is increasing every day.

Making the remarks in a ceremony to break the ground for starting the construction operation of 15,000 units of National Housing Movement in Chitgar region, northwest of Tehran city, Rostam Qasemi referring to the registration of 5.2 million people in National Housing Movement, said: "By the end of [Iranian current month) Khordad (June 21), the filing of all registrants will be completed and it is predicted that four million people will be selected."

Three weeks ago, Mohammad-Saleh Jokar, a member of the parliament, said that the young people are having trouble paying the National Housing Movement installments.
Referring to the difference between the implementation of Mehr Housing Plan (initiated in the previous government) and National Housing Movement, he said: "Today, a young man with a monthly salary of between 50 million-60 million rials (about $190-$230) has very difficult conditions for the installments of this plan, which should be considered to solve this problem”, the MP criticized.