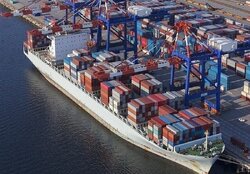 The value of Iranian exports to Oman increased by 126 percent in the first two months of the current Iranian calendar year (March 21-May 21) as compared to the same two months last year, IRIB reported.

According to Iran’s Commercial Attaché in Muscat Mehrdad Fallah, the Islamic Republic exported $203 million worth of non-oil commodities to Oman in the mentioned two months.
The total trade exchanges between the two countries in the first two months of this year also grew by 143 percent compared to the same period last year, Fallah said.

The share of Oman's market from Iran's total exports is 2.4 percent, according to the official.
Referring to the characteristics of the Oman market and the friendly and strategic relations between the Islamic Republic of Iran and Oman and the great export opportunities to this country, Fallah stressed the need to use these opportunities to increase exports to Oman and also access third markets through this country.

Heading a high-ranking delegation, including senior officials from various ministries and the representatives of 30 major companies, Raisi visited Muscat on May 23.
During his stay in Oman, the Iranian president met with senior Omani officials including Oman’s Sultan, Haitham bin Tariq.