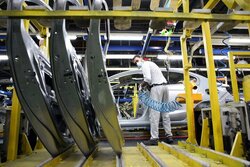 Three major Iranian carmakers, namely Iran Khodro Company (IKCO), SAIPA Group, and Pars Khodro, manufactured 226,428 vehicles during the first quarter of the current Iranian calendar year (March 21-June 21), which was 11.2 percent more than the figure for the same period of time in the past year, that was 203,529 vehicles, the data released by the Codal website showed.

The Codal’s data put the monthly car manufacturing at 104,141 in the third month of the present year.
During the said three months, IKCO manufactured 123,887 vehicles, which was 27.4 percent more than the output in the same period of the previous year.
In this period, this industrial group was able to manufacture 77,128 vehicles in the Peugeot group, 18,618 vehicles in the Samand group, 14,611 Dena vehicles, 7,786 Rana vehicles, 3,483 Haima vehicles, and 2,247 Tara vehicles.

Iran’s major carmakers had manufactured 867,363 vehicles in the previous Iranian calendar year 1400 (ended on March 20), which was 3.7 percent less than the figure of the preceding year.
According to Codal data, during the previous year, IKCO manufactured 451,121 vehicles, which was six percent less than the output in the Iranian calendar year 1399.

SAIPA manufactured 304,533 vehicles in the mentioned year, registering a 3.4 percent decline in comparison to the figure for the preceding year. And Pars Khodro manufactured 109,838 vehicles in the past year, showing a 6.4-percent rise from the output of its previous year.
Iran has been ranked the world’s 19th biggest automaker in 2021, according to the latest report released by the International Organization of Motor Vehicle Manufacturers, Organisation Internationale des Constructeurs d'Automobiles (OICA).

The minister considered the current situation of the automotive industry very problematic and added: "We have done a lot of work in the automotive industry and we have had good successes and progress, but the result has not been satisfactory for the general public and the customers."
Referring to the complexities of the automotive industry, he noted: “A car has more than 2,000 parts and every day 4,000 cars are produced in the country; We do not have any other industries with such managerial, economic and technological complexities.”
Iranian Industry, Mining, and Trade Ministry’s programs for the current Iranian calendar year show that the manufacturing of 1.2 million cars has been put on the agenda.