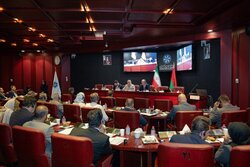 The forum was attended by representatives of some major Iranian companies and a Belarusian trade delegation comprising of the representatives of the country’s food and agricultural industries, led by Ambassador Extraordinary and Plenipotentiary of the Republic of Belarus to the Islamic Republic of Iran Dmitry Koltsov.
During this event, the two sides discussed ways to develop trade relations.

Speaking at this gathering, Koltsov announced his country's readiness to expand economic relations with Iran and described the forum as a starting point for building constructive and strong economic relations between Iran and Belarus.
He called for the holding of regular economic meetings in the two countries as a step forward for the private sectors of the two sides to reach greater mutual understanding.

The envoy underlined the two countries' membership in the Eurasian Economic Union (EAEU) as a historic opportunity for the formation of significant economic and trade relations, saying: "Iran is one of our trading partners in the region and we hope to benefit from the help and support of Iran in meeting the economic needs of Belarus, including in the field of transit."

He also pointed to the cooperation between the two countries in machinery manufacturing and food industries as the first steps for expanding mutual economic relations, noting that Iran and Belarus could expand exports to third markets through joint production in these sectors.

Bahman Eshghi, the TCCIMA secretary-general who was also present at the forum, said that the economic relations between Iran and Belarus have become limited due to the unjust U.S. sanctions, however, despite the situation, the two sides can find common ground at the present to provide a suitable platform for long-term economic growth and cooperation between the two countries after the lifting of sanctions.
As an active EAEU member, Belarus is very interested in cooperating with the Iranian private sector, especially in the field of transit and transportation.