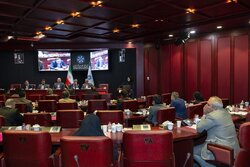 The 86th meeting of the dialogue council of the government and the Tehran Province’s private sector was held on Saturday, in which the representatives of some knowledge-based companies raised issues facing their businesses, the portal of Tehran Chamber of Commerce, Industries, Mines, and Agriculture (TCCIMA) reported.

The meeting was attended by Governor-General of Tehran Province Mohsen Mansouri and TCCIMA Head Masoud Khansari, as well as the representatives of the province’s private sector.
During the gathering, the government and private sector representatives analyzed the raised issues and concluded to form a working group in Tehran Governor's office to address the issues and challenges of the mentioned companies and facilitate their affairs.

Opening the meeting, Khansari referred to the elimination of subsidized foreign currency rates as one of the most important economic measures taken in recent months, and said that the allocation of subsidized foreign currency for the imports of certain commodity groups had imposed serious challenges to the country's economy and now the government seeks to amend the situation which would be a welcome approach.

Elsewhere in the gathering, Head of TCCIMA Digital Innovation and Transformation Center Sahar Bonakdarpour presented a report on the problems and challenges of knowledge-based companies and enumerated some of the bottlenecks in this field according to the data collected from the survey of 100 knowledge-based companies.
Further, Mahmoud-Reza Taheri, deputy secretary of the government and the Tehran Province’s private sector dialogue council, presented a report on the council's performance in the previous Iranian calendar year (ended on March 20) and said: "Last year, the dialogue council held 11 meetings, which resulted in 88 resolutions. Of these resolutions, 70 have been implemented, 17 are in progress and one has not been implemented.”