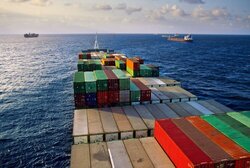 The value of Iran’s trade with the Caspian Sea littoral states rose 10 percent during the two-month period from March 21 to May 21, as compared to the same period of time in the previous year, the spokesman of the Islamic Republic of Iran Customs Administration (IRICA) announced.

Ruhollah Latifi put Iran’s trade with the mentioned countries at about 1,200,940 tons valued at over $897 million in the mentioned two months, Mehr News Agency reported.
During the said period, the Islamic Republic exported 646,364 tons of goods worth over $263.19 million to the four Caspian Sea littoral neighbors, which despite a 14 percent decrease in weight, registered a 17 percent increase in value, according to Latifi.

The share of imports from the total trade was 554,576 tons of goods worth $634.485 million, which increased by 62 percent in weight and 49 percent in value.
Azerbaijan was the first destination of Iranian goods among the Caspian Sea countries in the said two months, importing 121,338 tons of Iranian goods worth $114.977 million, followed by Russia with 198,663 tons of imports worth $68.584 million, Turkmenistan with 232,359 tons of goods worth $58.602 million imported and Kazakhstan with 94,003 tons of purchases worth $20.854.
As for the imports, Russia was the top source of Iranian imports among the Caspian Sea neighbors, selling 443,681 tons of goods worth $319.142 million worth of commodities to Iran in the mentioned period.

As previously announced by IRICA, Iran traded over 22.196 million tons of non-oil products worth $16.631 billion with other countries in the first two months of the current year.
The value of Iran’s export of non-oil products increased 37 percent during the said two months as compared to the same period of time in the past year.
Iran exported 17.014 million tons of non-oil commodities worth $8.516 billion in the mentioned time span, also registering a 1.6-percent rise in weight as compared to the first two months of the previous year, the IRICA data indicated.