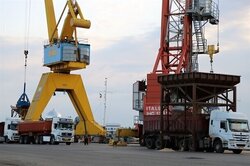 More than 5.5 million tons of basic commodities were transported from eight port cities of the country to the designated destinations during the first quarter of the current Iranian calendar year (March 21-June 21), the director-general of cargo transportation department of Road Maintenance Organization announced.

This amount of basic goods was loaded from eight ports of Imam Khomeini, Shahid Rajaei, Chabahar, Amirabad, Fereydoun-Kanar, Nowshahr, Anzali, and Bushehr, and transported to the desired destinations in the country, Mehrdad Hamdollahi said, adding, “According to the statistics of loading of basic goods from the country's ports, Imam Khomeini port ranks first with the issuance of 132,000 bills of lading and the loading of 3.277 million tons of commodities.”

Shahid Rajaei port with 899,000 tons, Chabahar port with 516,000 tons, Amirabad port with 338,000 tons and Anzali port with 182,000 tons are in the next ranks respectively, the official added.
As announced by the deputy head of Islamic Republic of Iran Customs Administration (IRICA), 30.9 million tons of basic goods worth $19.6 billion were cleared from the customs in the past Iranian calendar year 1400.

Quarterly loading, unloading of goods in Iran’s ports up 7% on year