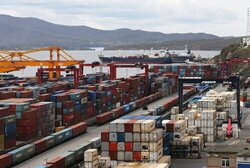 Following a recent agreement between Tehran and Moscow, the Federal Customs Service of Russia is going to provide special facilities to Iranian exporters to accelerate clearing their goods at the customs of the country, the Islamic Republic of Iran Customs Administration (IRICA) announced in a statement.

“According to the recent agreements with the Russian customs, and under the framework of the pilot implementation of a green customs channel between the two countries, some special facilities will be granted to Iranian exporters for the clearance of goods from the customs of this country,” the IRICA statement said.

Earlier this month, Iran and Russia signed two memorandums of understanding (MOU) as well as the draft of a legal agreement to broaden cooperation between the customs of the two countries.
The MOUs were inked by IRICA Head Alireza Moghadasi and Head of Russia’s Federal Customs Service Vladimir Bulavin in Moscow on June 10.

Holding training courses, combating customs violations, and identifying competent economic operators to implement a green customs channel were the subjects of the mentioned MOUs and the legal agreement.