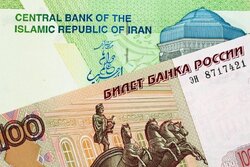 Iran and Russia have taken significant steps for removing the U.S. dollar from their bilateral trade, launching a settlement system to use their national currencies in economic exchanges, renowned American business magazine Forbes admitted in an article piece published on Friday.

The new arrangement means the two countries can now settle trading debts in each other’s currencies. The first trade took place on July 19, the day that Russia’s President Vladimir Putin arrived in Iran for talks with Leader of the Islamic Revolution Seyyed Ali Khamenei and President Ebrahim Raisi.
As reported, the new monetary system could significantly reduce the two sides’ demand for dollars. Bilateral trade between Iran and Russia stood at four billion dollars in 2021 but the two countries say they are hoping to ramp up bilateral trade to eight billion dollars in the short term.
The new trading arrangement allows them to avoid the use of dollars and, by doing so, also sidestep the impact of the U.S. sanctions.

Iranian officials say they plan to expand the new bilateral settlement system to include the currencies of other key trading partners, including the Turkish lira, the Indian rupee, and the United Arab Emirates (UAE) dirham.

“We will offer other currencies in the future to have a diversified basket and to reduce the influence of currencies like the dollar,” Saleh-Abadi said on July 21.
If that happens, the effect will be to create a network of agreements enabling Iran to carry out trade without having to resort to the dollar or the euro.
Iran’s deputy foreign minister for economic diplomacy Mehdi Safari has also floated the idea of developing a new interbank messaging system between Iran and Russia. This could act as an alternative to Swift.

Speaking to the media in late July, Saleh-Abadi said: “Two countries that want to de-dollarize their transactions must have a special system similar to Swift… We have practically reached a very good agreement.”