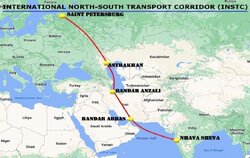 The Islamic Republic of Iran Shipping Lines (IRISL) has transported 3,000 tons of goods as well as 114 TEUs of container commodities along the International North-South Corridor (INSTC) over the past two Iranian calendar months (May 22-July 23).

As IRNA reported, IRISL formed an operational working group for the development of transportation along INSTC in early April and the company has so far allocated 300 vessels to the transportation of goods through this corridor.
The north-south corridor was primarily launched with the aim of transiting goods between India and Europe through Iran; however, it remained in the early stages of execution for many years.
The conflicts between Russia and Ukraine and the special geopolitical situation of Iran in the region have once again laid a suitable ground for the revival of the mentioned corridor; so, this has created a great business opportunity for the Islamic Republic of Iran on the international stage.
Currently, most of the commodities that are transported through Iran along the INSTC are shipments from Russia for India.

Russians and Indians know very well that the transit time of shipping goods on routes through the Black Sea and Suez Canal takes something between 45 and 60 days, and cargoes on these two routes roam 14,000 kilometers from ports of Central Asian countries to East Asian countries which is considered a very long way. However, the same goods reach their destination via the INSTC using Iranian Bandar Abbas and Chabahar ports in only 14 to 15 days which is a third of that time.
To be transited through the north-south corridor, cargos enter northern Iranian ports on the Caspian Sea shores and then transferred by road to the southern ports of the country on the Persian Gulf. From there they are loaded onto a ship and sent to their destinations in East Asia.