‘There are a lot of potentials to boost trade between Iran, Malaysia’ 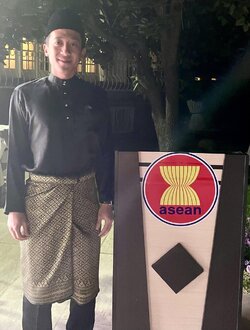 Malaysia’s Charge D’affaires ad intrim in Tehran Mohd Nizam Halimi said that there are a lot of potentials to improve and increase trade between Iran and Malaysia.

Making the remarks in an interview conducted by the Tehran Times on the sidelines of a ceremony to celebrate ASEAN Day 2022 in Tehran on Tuesday, he said: “At the moment trade relations between Malaysia and Iran is very good; last year the total amount of trade was about six hundred million USD.”
“Most of the products coming from Malaysia are palm oil and also our rubber products are exported to Iran”, he stated.

“There are a lot of routes to improve and increase this trade, especially we can, I mean there is a lot of areas that we can potentially cooperate in the field of tourism, scientific research, and also cultural activities.”
Asked about the main challenges in the way of trade between the two countries, the official said, “Of course, aside from sanctions that make a lot of issues, there are some challenges that we are facing not only to Malaysian companies but also from Iranian companies coming to Malaysia.”
“If I may say, one of the challenges aside from the banking restriction, is also we need to identify what kind of products that we could import from Iran more, because right now the trade balance is seen in favor of Malaysia, because of our palm oil export and our timber and also rubber products export.”
“So, we need to identify the specialty of Iranian products that Malaysia could import more into the country.”

Answering a question about establishing barter trade between the two sides under the condition of sanctions, he said, “Of course, barter is one of the mechanisms that we could consider to increase our trade with Iran, but as I mentioned earlier, the challenges are to identify the products, if you want to import palm oil from Malaysia, we have to identify what type of product we could import from Iran as part of this barter mechanism.”
“We don’t have any barter trade with Iran at the moment, but we are exploring the possibility and potentials to have this barter trade as well.”
Asked about the prospect of Iran-ASEAN trade, Mohd Nizam Halimi said, “We have a very good environment for economic cooperation with Iran.”

ASEAN is one of the biggest economies in the world, and there are a lot of possibility and potential areas that Iran and ASEAN can work together, especially developing trade and also economic relations.
And asked about the barriers in the way of trade, he said, “Of course, challenges are with the unilateral sanctions by a country against Iran. So, they restrict the activity, the economy, and also activities between the ASEAN members and Iran; however, if the sanctions would be potentially lifted, and the nuclear deal is potentially revived, it would open more chances and possibilities for ASEAN countries and Iran to increase the [trade] figures.”