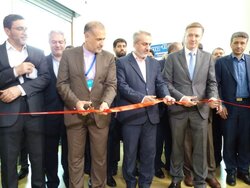 The head of Iran’s Trade Promotion Organization (TPO) considered Iran's presence in the Moscow automobile exhibition as a serious start for great cooperation between Iran and Russia in the field of automobile manufacturing and more importantly in the fields of supply and export of automobile parts.
Making the remarks on the sidelines of the inauguration ceremony of the expo, Alireza Peyman-Pak said, "Automobile sector", "auto parts" and "automobile value chain" are important axes that lay the foundation for the development of economic relations and the increase of commercial cooperation between the two countries.

Over 40 Iranian auto part manufacturing companies besides the two major Iranian automakers, Iran Khodro and Saipa, will discuss bilateral cooperation with their counterparts at this international event.
In this four-day exhibition, the center for the exchange and transfer of technology and technical knowledge in the field of parts manufacturing and automobiles is considered, which is expected to use the high capacity of Iran in parts manufacturing due to the embargo on the Russian automobile industry.
Negotiations regarding the creation of a joint platform between Iran and Russia or Iran, Russia and China are also underway, which have good prospects.