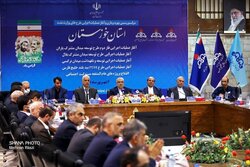 On the occasion of Government Week (August 24-30), Iranian Oil Minister Javad Oji ordered the beginning of executive operations of five major oil industry projects in Khuzestan Province, in the southwest of the country, on Friday, Shana reported.

Inaugurated through video conferencing, the mentioned projects include the second phase of the Yaran oil field development, the development of Balal gas field in the Persian Gulf, the development and maintenance of Nargesi field in Gachsaran, and the development of the Propane dehydrogenation to propylene (PDH) unit of Bid Boland Refinery, as well as some social responsibility projects.

As reported, the development project of Balal gas field has also been assigned to Petropars Company under a contract valued at $500 million. The first phase of the project includes the drilling of a descriptive-exploratory well with $28.4 million of investment.

The development and maintenance of Nargesi field is being conducted by Dana Energy Company under a 41-month contract. During the contract period, Dana Energy Company is obliged to increase the field’s production to 6,000 barrels per day (bpd). The implementation of this plan will generate more than $500 million in revenue for the government within two years.

The Propane dehydrogenation to propylene (PDH) unit of Bid Boland Refinery is going to convert 700,000 tons of Propane to propylene every year; over $950 million has been invested in this project.