Monthly exports from mining sector stands at $1.29b 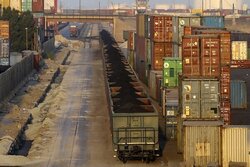 The value of Iran’s export from the mining sector stood at $1.29 billion in the third Iranian calendar month Khordad (May 22-June 21), which was a record high, the data released by the Islamic Republic of Iran Customs Administration (IRICA) indicates.

The IRICA data indicates that in the third month of this year, steel accounted for 65.9 percent, copper for 11.6 percent, zinc for 3.2 percent, sponge iron for three percent, aluminum for 2.9 percent, cement for two percent, pellets for 1.4 percent and other products of mining and mineral industries for 10 percent of the export share.

Iranian mining industry has registered a $4.271-billion positive trade balance in the previous Iranian calendar year (ended on March 20), according to the Industry, Mining and Trade Ministry data.
Based on the mentioned data, some 55.124 million tons of minerals and mining industry products worth $7.682 billion were exported in the previous year, while the imports of such products stood at only $3.410 billion.

As reported, the Islamic Republic imported 4.156 million tons of mining and mineral products in the year under review, registering six percent and 13 percent year-on-year rise in terms of value and weight, respectively.

Steel had the biggest share in Iran’s export basket of mining products (53.7 percent) with $4.127 billion worth of exports, followed by copper, cement, and zinc chain products.
In line with Iran’s major plans for distancing the country’s economy from oil and moving toward a resilient, oil-free economy, the mining sector has become one of the major areas of focus in recent years, since the country is one of the world’s top 10 mineral-rich countries where 68 types of minerals have been identified so far, including the world’s largest deposits of copper, zinc, and iron.
Expansion and exploitation of these huge sources of income have become a top priority for the government in recent years, and various programs have been defined for the improvement of this industry.

Reviving idle small mines, increasing the tariffs on the exports of some raw minerals, defining new exploration projects, signing memorandums of understanding with domestic and foreign manufacturers for the renovation of the country’s mining equipment and machinery, and allocation of funds for the completion of semi-finished projects in this sector can be mentioned as some of the programs introduced by the government for the development of the country’s mining sector.

Iran had planned to raise the exports from the mining sector up to $10.5 billion in the previous year however the restrictions created by the coronavirus pandemic prevented the realization of the mentioned goal.